Because there are no bad ideas, only bad executions. This is a series where I take a look back at things that could have worked or could have been made even better.

If I come off as a broken record than I apologize. I would only like to reiterate that in 20/20, I’m not saying I dislike the product in question or even think it’s bad in any way. I’m only offering an opinion or take where I feel some opportunities may have been missed that could have made what I like even better.

With that out of the way, Into the Badlands is an AMC show currently in its third season for those of you who don’t know. It takes place in a distant, post-apocalyptic future where a new feudal society controlled by Barons with their “Clipper” enforcers has arisen across a large territory of the former United States dubbed “the Badlands;” hence the title. The show’s major hook is that it’s a major American television production to employ elements and talents of the martial arts genre.

One of our heroes M.K., in a display of how NOT to handle exposition by the way, tells us in narration in the first episode that the Barons “banished guns.” Which is why all of the action involves fists, feet, and blades. The fight scenes are absolute aces. Huan-Chiu Ku, who worked on the fight scenes for Kill Bill, Once Upon a Time in China II, and Crouching Tiger Hidden Dragon brings his Hong Kong expertise and it gives the show a sleek yet hard-hitting energy you’d only think could be found in films of the genre.

That being said, the actual purpose of the fight scenes are somewhat standard as far as Hong Kong martial arts films or Japanese Jidai Geki go. Informing us about the characters via their fighting style, facilitating life and death stakes to the deep personal conflicts between two characters, and building the world by seeing the arts’ place in the society. Which was disappointing to me because I thought the show would use its genre in combination with its setting in a more unique way. By no means do I think the actual story is bad, it’s just not anything I haven’t seen before beyond aesthetics.

A world without guns

The show’s first season was shot in New Orleans, Louisiana. This was perhaps the best artistic decision of the entire first season. One of my initial excitements about the show was that it was a martial arts focused series set in the (former) United States. Proud patriot and martial arts student that I am, it does sadden me that my beloved home doesn’t have a truly unique legacy within the martial arts culture. To be sure we’ve given rise to some great fighters, star of the show Daniel Wu being among them, and Americans have created new styles of their own. Our culture though doesn’t really have a place in history or myth where a single fighter overcomes a foe through his skill in hand to hand combat. The United States as a country has never known a time without the gun being the primary weapon of warfare. Which I don’t see as a bad thing on its face but it does mean that the martial arts have a more limited place both in our reality and in the stories we tell.

So having a story set in a post-apocalyptic society that inherited some aspects of the U.S.’ present and past while making the martial arts an utter necessity to be skilled in was a major hook for me. Seeing these Hong Kong level fights done among the weeping willows and bayous of the Deep South was a treat to behold. The Cogs (workers) reaping the poppy fields drawing obvious comparisons to slavery in the antebellum South. The River King being an important figure of trade along the Mississipi. One of the major villains even opines upon a model of Washington D.C. calling it “the shining city on the hill.” It all felt authentic to the culture. One thing was missing though. Guns.

Obviously, the show’s premise means they can’t be present but the fact that no one even mentions them or gives context as to what their absence means is a major missed opportunity. M.K.’s exposition informs us that people flocked to the barons for protection and that protection morphed into submission. So it’s pretty clear the Barons outlawed guns for the same reason all tyrants do, to strip their subjects of their means of dissent and independence. How was this reacted to though? Look at people’s diverse views on guns now.

Did the people rejoice? At last, their pleas were answered that the meaningless mass slaughter by means of the black AR-15s were over.

Did they resist? Their worst nightmares come true. The regime promising security at the cost of their freedom had finally come knocking without even the pretense of civility.

Maybe a little of both? Were some not happy with the Barons taking over but joyful that now other means of violence were actually practical again?

I understand that this is a difficult issue for many people of either side and I can’t say I’m jumping out of my seat when shows and movies use cool subject matter to try and talk about real-world topics I’m uncomfortable about. Like Roger Ebert said though, “it’s not what a movie is about, it’s how it is about it.” The fact that Into the Badlands chooses to be “about” the United States’ relationship to guns and the martial arts by excluding their interconnectivity altogether is just disappointing to me. 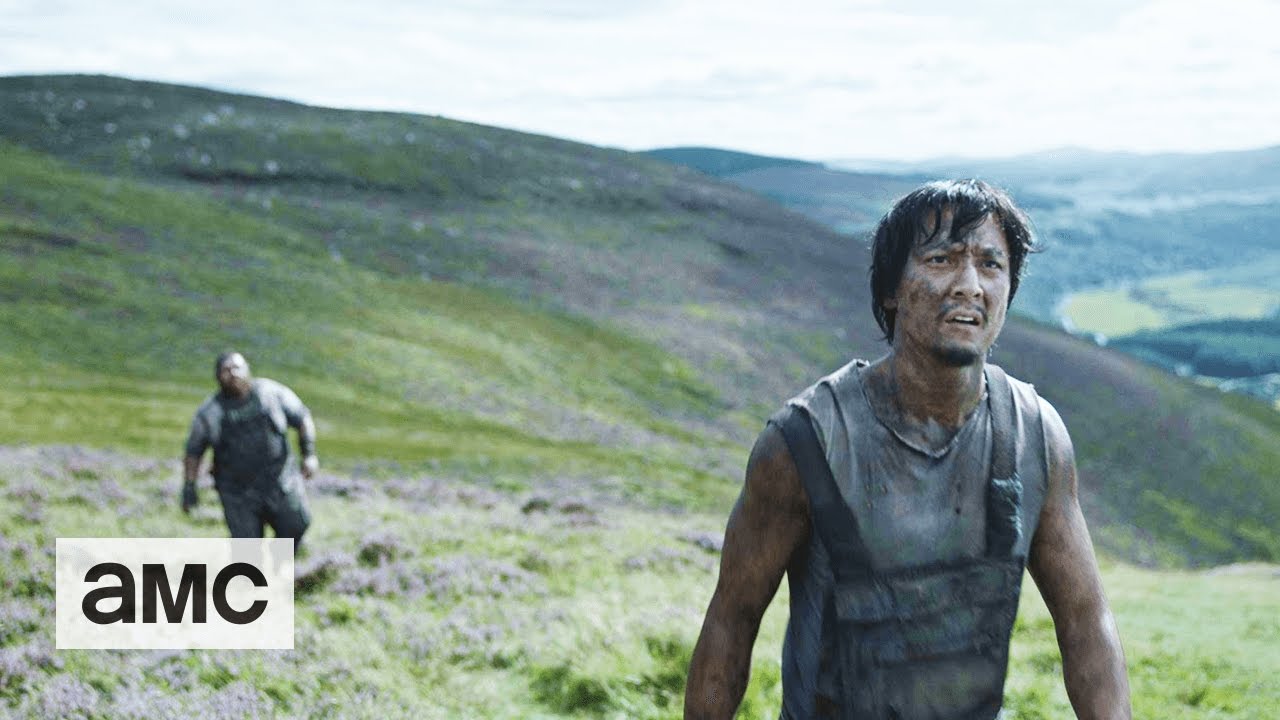 While season one didn’t exactly capitalize on the potential I thought it would, it still hooked me with all of its other excellent qualities and could always revisit those elements in season two. That was until I heard that the production had been moved to Ireland. Just like that, I know the show I wanted would never come to be. According to Daniel Wu, the move allowed the show more flexibility in terms of environment and giving it a bigger scope. He’s absolutely correct. Many of the scenes in season two could be mistaken for something out of Mad Max in a colder climate. Nevertheless, it just sealed the coffin on what I thought was a great direction for the show to take.

Obviously, the setting itself didn’t change, the River King didn’t boat Sunny across the Pond, yet the actual location shift is unmistakable. The stately plantation houses and New World architecture have been replaced with stone churches and nobility manors. The wide shots of travel are an inescapable reminder because the geography and landscapes are so different. It just constantly pulls me out of the story and reminds me of the artifice that I’m watching a show, and for one with as HUGE a suspension of disbelief as I do, that’s not easy to do. Of course, that has nothing to do with the show itself. What does have to do with the show is the uniqueness of the premise has now been greatly reduced.

Think of it like Michonne in the Walking Dead. Almost every character is armed with some kind of firearm and she shows up swinging a katana. Why is that seen as special? Because TWD is filmed and set in Georgia, where guns would be easy to obtain and a sword is an obsolete weapon. So it’s different and interesting that Michonne would prefer such a weapon in that setting and even moreso that it’s actually pretty effective against the show’s background shambling menace. The reverse holds true for Sunny and co. People have waged war on the British Isles since before the Roman Republic. Seeing them fight hand to hand with blades and clubs to the background of Ireland, even with Kung Fu, isn’t “special.”

This raises the question as to why they even bothered to set it in post-apocalyptic North America in the first place? If the location of the story was so incidental, why not just have the action moved to Ireland? Make Sunny’s journey one to actually cross the ocean again to get home? Heck, since the show is so focused on its internal lore and politics, why does it need to be on a future version of our Earth at all? Remove M.K.’s narration and the occasional reference to our own history and it would otherwise change nothing.

We gotta blow it up and start again

Couple ideas for this fix. Simplest would be to set it in its own world, go the Avatar: the Last Airbender route. My more extensive fix would be to scale the timeframe back a bit. Make the Barons a rising power rather than the establishment. The actual events of the downfall of society could still be kept vague since it really doesn’t matter for the story. On the other hand, M.K. mentions “the war” so maybe it could matter a great deal. Maybe a non-nuclear war still escalated to the point where global civilization collapsed and massive civilian population die-offs caused people to refrain from more advanced and destructive methods of combat.

In either case, the show’s world is one where guns are still around but they’re starting to disappear. The barons, through their elite Clippers, are assassinating all those who manufacture firearms and ammunition. Fewer and fewer people are willing to sentence themselves to death for building them. Just as much, the skill of the Clippers is making serving the Barons attractive to many. So they flock to them for the training and stability promised. As for the Barons, they pen the Foundation Treaty and become a sort of twisted parody of the Founding Fathers, promising a new country free of violence and chaos, where a place in society is guaranteed.

In response to this, several schools open up across the Badlands, teaching students their ways as both fighting techniques and life philosophies. Bronco Buster, Neo Capoeira, Patriot’s Fist, Way of the Cross, Jailhouse Rock, Mississippi Swing, and more. All different, meaning plenty of different characters with unique fighting styles, but all to keep their students from joining or being oppressed by the tyranny of the Barons. Plus, all of this would provide a very unique canvas for Americans to ponder and discuss the martial arts as related to our culture, outside of Hollywood or the (much appreciated) influences of the Asiatic sphere.

So that’s my fix on Into the Badlands. Again, I’d like to stress that I do like the show and the fact that it’s not exactly what I want it to be isn’t a mark against it. Simply a fan spinning it in a way I thought might be fun for all.