You can take the Captain out of America, but you can’t take America out of the Captain.

During the lead up to Avengers: Infinity War, I read and heard a reoccurring idea among review pundits. While I had no problem with most of their analysis, in fact, many of them did really in-depth explorations of the character that I appreciated as a lifelong Cap fan. They sometimes concluded their retrospective with a variation of, “Steve Rogers has gone from a patriot to a man on the fringe.”

Gone from a patriot. The implication being that Steve is no longer Captain America, not just officially but in spirit. While I can certainly see why some would come to this conclusion, I think it misunderstands key aspects of both the character of Captain America and of the form of patriotism unique to the United States.

The Sentinel of Liberty

Some may be under the impression that the MCU has “rehabilitated” Captain America for the modern era. That through the adaptation process he has been relieved of his old-fashioned, nationalistic traits. This is wrong and right at once. Cap has been adapted for the modern era but that process has been ongoing since shortly after his creation. Like many superheroes, Captain America has been subject to the reinterpretations of dozens of writers as he’s been passed along through the decades. Also like many superheroes, most of said handlers have tried to keep to Cap’s core identity while still putting their own little spin on him. Steve Rogers is always the ideal representation of the United States but the writers come up with different ways in which Steve reflects upon or interprets himself; as an icon, as a leader, as a veteran, as a man out of time, and more.

So the Captain America identity being invented as a USO attraction to sell war-bonds that gets shoved on Steve only for him to take up the mantle more sincerely in the First Avenger isn’t a radical act of re-imagining. Rather, it’s a justification as to why the humble Steve “I’m just a guy from Brooklyn” Rogers would self-identify as the living embodiment of an ideal. In the comics, Captain America has always been selfless, his depiction in the movies only exist to humanize and help the audience understand that quality and what is being asked of Steve to give up. In the first movie, it was to risk his life in an experimental procedure and subsequently serve his country against a great evil threatening the world. In Avengers and subsequently Captain America: the Winter Soldier, he realizes he has to become Captain America for the modern world because it’s what the world and his country needs of him.

“Loyal to nothing … except the Dream.” 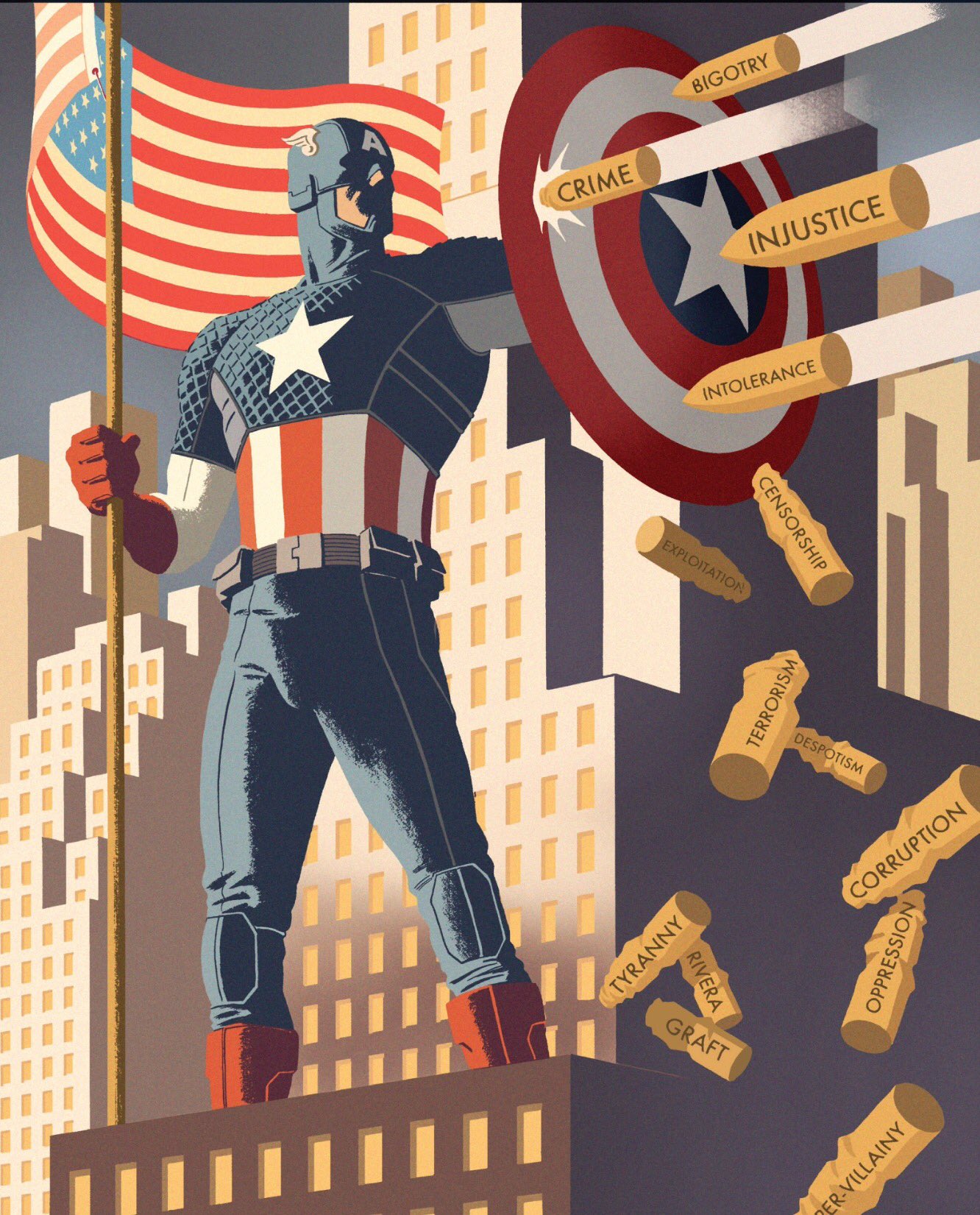 Captain America is a patriot, specifically, he’s an American patriot. Something that is sometimes lost among foreign viewers and even other Americans, is that dissent isn’t necessarily an act of rebellion against the nation here. All the way back to the Founding Fathers writing in safeguards to hold the government accountable and citizens having the protected ability to express dissatisfaction.

For Marvel, Captain America has always been that safeguard, that expression. Cap has never been one to hide behind his metaphorical red, white, and blue shield. Multiple times in the comics he has called out others for justifying their actions with patriotism and protection when said actions violate the core principals of liberty, such as when he fought the Vietnam vet supervillain, Nuke. Cap has fought villains representative of flaws or corruptions plaguing the American psyche such as the Secret Empire lead by a caricature of President Nixon or the evil Roxxon Oil Corporation. Just as much, he’s fought villains that are ideologically opposed to the United States such as the anti-nationalist Flag-Smasher or the obviously Fascist Red Skull and allies.

These aren’t contradictory stances though. To be an American patriot is to sincerely believe in and love the country. Enough to call it out when it fails to live up to the standards it set for itself. One of my favorite quotes of all time was said by Carl Schurz an immigrant who became a Senator.

“My country; and my country is the great American Republic. My country, right or wrong; if right, to be kept right; and if wrong, to be set right.” In an example of true rehabilitation through adaptation, Steve’s appearance and role in Avengers: Infinity War has some aspects of an arc in the comics when Steve forsook the Captain America identity out of disgust of the government’s actions and became “the Nomad, a man without a country.” It’s generally regarded as one of those runs on a character that was trying to be dark and edgy while sacrificing enjoyment. While never called “a nomad” or “the nomad” in the film, Steve’s outfit and place in the story match the comic to a suspicious degree. Inasmuch as Steve has given up the public identity of Captain America out of a disagreement with government action while dressed in black with a lack of patriotic symbolism.

Only, and this is where people get tripped up, Steve hasn’t given up on the ideals of the American Dream, he’s paying the price for living by and protecting them. During the events of Captain America: Civil War, Bucky is accused of a crime he didn’t commit and is now the target of a witch hunt by the newly emboldened superhuman policing law enforcement. Even if Bucky wasn’t Cap’s best friend and surrogate brother, this is the same man who was against pre-emptive action in his second movie.

“I thought the punishment came after the crime.”

By the end of Cap’s trilogy, he’s already sacrificed himself yet cheated death unintentionally twice in his first two movies. By the third, he has given up something likely more precious to him than his own life. His citizenship. Steve can never return to the United States and is now considered a traitor to all that he stands for. In some ways, he can be likened to Benedict Arnold or perhaps more controversially to Edward Snowden. The people who are called traitors sometimes see themselves as the true patriots on the right side of history when the world has turned against what they’re truly loyal to.

2 thoughts on “Captain America is still a patriot.”