How about that huh? This actually makes it a perfect time to talk about something I’ve been meaning to express for awhile now. While Fallout itself is most certainly a science fiction series, it bears many connections with traditional fantasy and indeed mythology only presented in a uniquely American way. It goes beyond the mere aesthetics, I assure you.

That being said, the distinctive style of the games do deserve a closer examination. During the Cold War, the United States was awash with pride at their triumph over the Axis powers alongside their allies and coming out of the most destructive conflict in human history with their economy not only stable but in some ways better than when the war had begun . . . unlike its allies. On the flipside, one of said allied powers, the Soviet Union, had neatly slid from a friend of convenience to greatest threat. To the surprise of absolutely no one and leaving General Patton rolling in his early grave. But I digress.

With the dawn of the Atomic age, the promise of almost limitless energy, the first stages of space travel, and new appliances making life just a bit easier; the average American had a lot to be optimistic about and look forward to. At the same time, with the Soviet Union building up its own nuclear arsenal, dominating more and more territory, and infiltrating western institutions of power; there was just as much to be afraid of and on guard for. It’s in this peculiar mix of sunny optimism against the backdrop of total annihilation that Fallout gets its signature aesthetic, often used for dark irony. While the fear of apocalypse is far from an American phenomenon, the contrast of futurism pursued with wild abandon even amidst the bomb blasted ruins of long forgotten empires, is. With nothing to fall back on in our past, the future is where we find our true selves. Even if that future is a pile of ash, it’s a gamble Americans by and large are willing to play.

Civilization or: How we don’t fit in the Congo 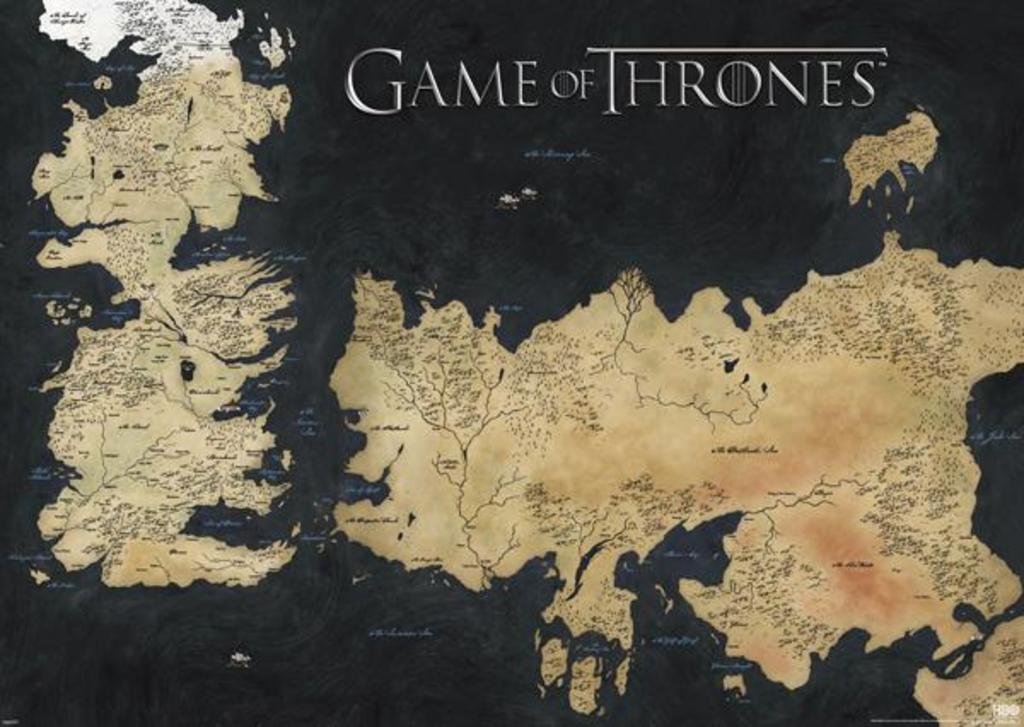 Above is a map of the now familiar to millions realm of Westeros and neighboring continent of Essos. It’s somewhat common knowledge that G.R.R. Martin initially drew heavily from the War of the Roses as inspiration for his seminal dark fantasy epic. In addition though, many of the cultures, nations, and even specific events are drawn from real life historical ones. Rhaegar taking Lyanna and a dynasty destroying war that followed is very reminiscent of the Trojan War. Perhaps not intentional, but Shogun Toyotomi Hideyoshi melted down the swords of his regime’s enemies into a statue of the Buddha. Echoing Aegon doing the same to make the iconic Iron Throne. Heck, the Mad King has more than a little Caligula or Nero in him, which is fitting since the Targaryens are sort of analogous to the last scions of the Roman Empire if the eruption of Mt. Vesuvius at Pompei happened for basically all of Rome, e.g. the Doom. The Dothraki are like the Mongols, Braavos is like mercantile Venice, Dorne is Moorish Spain, etc. etc.

Rome, the Tudors, the Golden Horde, even splashes of Feudal Japan. Notice someone pointedly absent from this world of historical culture clash? It’s not just Martin’s Song though, far from it. Many fantasy authors use historical groups in crafting their world’s societies, going all the way back to Tolkien. Overwhelmingly though, the default for these settings is Medieval Europe. The middle age architecture of castles, kings and feudal lords, swords and plate or chainmail armor, even magic reflects contemporary understanding of certain clergy and mystics as the sole keepers of knowledge on the greater workings of the universe. Reaching out, we can see, often to the East, nations that are a hodgepodge of multiple Asian cultures. Most often a singular empire that’s a mix of China and Japan but just as often smaller realms that have influences of Arabic and Indian culture. Occasionally there will be nomads that represent great plains nations such as the Commanche or Sioux but when it comes to Indigenous people of the Americas the more common counterpart is to the Aztec with a combination of the Maya, Inca, or both.

This, by no means comprehensive, broad strokes analysis of the common fantasy setting shows an incredibly vast stretch of human history and geography coexisting or at least in knowledge of one another. A stretch that seems to pointedly end at around the early 17th century at the latest. What this means is that, without some tweaking or purposeful inclusion, the United States doesn’t exist in this world of swords and sorcery.

Unless one is ethnically a Native American, our ancestors haven’t been living on the land we call home for very long. At the earliest, we can trace ancestry back to the Mayflower which seems like pre-history to most Americans, indeed it pre-dates the country itself, but is laughably recent to nations such as France that have buildings dating back to Antiquity. As such, our national mythology can’t place George Washinton as a contemporary to King Arthur or John Henry to Hercules. So if we can’t look back, we have to look forward.

While much of the Fallout lore and themes are meant to be dark and satirical, the initial premise, after all, is the 50’s optimism portrayed as both naive and the tool of a sinister government against the backdrop of the world coming to an end. Beyond that though, the agency afforded to the player to make things better in the Wasteland is quite extensive. Leading to endgame’s where a few scattered communities have begun to build hubs or coalitions of civilization and relative safety.

In this world where recovery is difficult but possible, various factions have sprung up to form cultures out of the half-remembered remnants of the pre-war country. It is from this that the Wasteland begins to read like Westeros or Middle-Earth. Groups and individuals that are recognizable from our own world and history yet different in subtle or not so subtle ways. All recontextualized into a world where the omnipresence of technologically advanced society are downplayed and scarce. So small bands of adventurers or one lone hero can comfortably quest in thrilling environs. The various Fallout games, in between the subway vampires and talking tree cults, are absolutely overflowing with American history and culture. Here are just a few and by no means comprehensive examples. 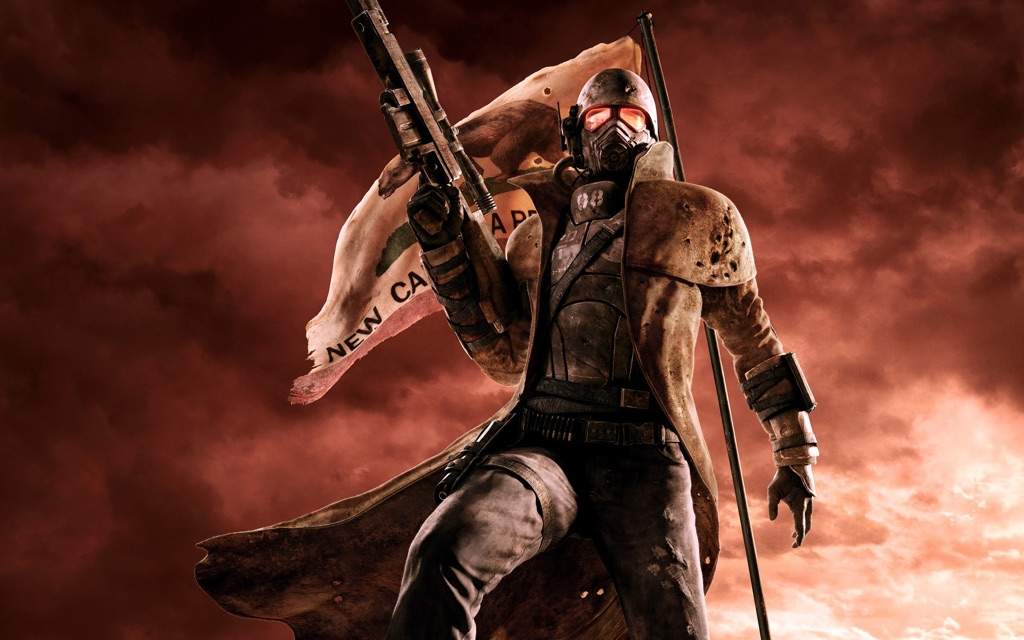 -The elite New California Republic Rangers draw parallels both from modern special forces with their combat gear and high powered sniper rifles and wild west lawmen by their trenchcoats and revolvers. The NCR Rangers even incorporated the Desert Rangers, who drew direct descendence from the legendary Texas Rangers. In Fallout the archetype of an elite warrior isn’t a knight (although the Wasteland has those too), it’s a hybridization of America’s elite gunslingers from both the mythic frontier era and the superpower present.

-Mr. House, the uncrowned king of New Vegas is a pretty obvious take-off of Howard Hughes. Both men being self-made billionaire technocrats that famously secluded themselves in the later years as their health declined. Heck, House even inherits some of Hughes’ questionable monetary decisions that marked his later years. The side by side above really nails the point home. Ironically, the game actually presents the man in a far nicer light than actual history. Hughes was known to be paranoid in his later years whereas House is portrayed to be acutely aware of the world going to Hell and is absolutely right. After the bombs fall, he gets a new lease on life as the mysterious, even ominous, unseen technological orchestrator whose influence over his realm is ethereal yet unquestioned, almost like a wizard in his tower. -In the Capitol Wasteland, the slavers set up camp in the remains of the Lincoln Memorial. The irony of them doing so in the building dedicated to the man who ended slavery is actually not lost on them. That’s why they decapitated the statue. At the player’s discretion, one can find the head and with a group of former slaves, kick out the rebrobates and restore Lincoln’s head atop his shoulders. The freedmen and women even worship Lincoln as “the Great Emancipator,” a title actually attributed to the man. Add to this the presence of a weapon called “Lincoln’s Repeater” found in the ruins of the Smithsonian and actually based on a real Henry rifle given to President Lincoln, it’s clear this game has a special place for the former President. How many times in fantasy fiction has a king or god lent his visage and name to a statue of symbolic import or a weapon related to them had special qualities?

-Pittsburgh. At least nominally familiar territory to me as I grew up on the other side the Alabama in between it and Philly. The city has something of a reputation as an urban industrial zone with poor working conditions. Of course in the Wasteland, it becomes a smog-choked Hellhole where your options are either hard labor, pit fighting, or taking your chances with the ravenous mutants just over the wall that your captors are keeping out whilst keeping you in. I’m sure we all can name at least one fantasy city or even nation that forces its underclass into gladiatorial fights for the entertainment of an elite who enslave them. -The Atom Cats are a rather obvious homage to fifties greaser culture. With their slang, leather jackets, sunglasses, and most of all, their obsession with tuning up high octane machines. Only swap out cars with power armor. Not as much a direct fantasy parallel just another example of the series taking Americana apart from the bombastic Stars & Stripes and giving it a unique spin that still remains true to the unique culture that birthed it.

“Who are you, that do not know your history?”

That last part above really does hang over the whole of Fallout and is a large part of what I appreciate about it. The popular perception of the United States often conjures images of the flag, the government, symbols of the nation itself. Oftentimes these leave out the smaller bits of American culture that may not be as universally recognized and sometimes aren’t even seen as a form of culture to some. Yet they are and they’re aspects that have shaped and continue to shape the identity of Americans to this day. Fallout lets us play in roles normally outside the kinds of fantasy adventures many of us enjoy. In the Wasteland, a cowboy can be a monster slayer, a plucky boxer is considered a martial arts master, and an Elvis impersonator is a master diplomat. That’s what makes Fallout an American fantasy.